one of my best Twitter friends (and her books!).
You can follow her as part of the Rafflecopter (much more also) and win her books* too! Both Sky Song and Young Moon... Sky Song covers. We're wondering... Which cover do you prefer?

They have already been released & Sharon Sant is looking to giveaway copies of both ebooks* to one lucky winner. So, you want two books*? That's right! You could win them (it's international)!

Anyway... I'm interviewing Sharon on the above book (yes, with two covers) and herself (you like that too... right?). If you'd like to find out more about her & these books go to Sharon's site.

Jacob was originally a girl.
True! When I first had the idea for Sky Song, it was a story for much younger readers and the main character was a little girl. Lucky for Jacob that I shelved that idea…

Ellen is your extrovert character who is a vital ingredient in the potion that is the... SKY SONG TRILOGY**!
True and False. Ellen is definitely a vital ingredient. By the time you get to book 3, you’ll realise just how vital she is. I’m not sure she’s really an extrovert, though, that’s definitely Luca’s territory. But she is a very tough character with the strongest sense of morals of the three. She keeps the other two in check.

You dislike the process of creating minor characters who aren’t supposed to shout ‘IMPORTANT SOON!’**
True! I do quite dislike inventing minor characters. I always want to give them personalities and stuff to do when all they really need to do is walk past my MC on the street!

Is there anything you'd like to say to your teenage self- would you mention being a published author? What would your past self think of that? 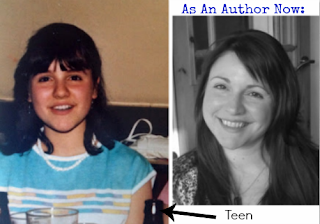 My teenage self would be running around the room screaming like a crazy person if I could tell her that people would be reading her books. I’ve always wanted to write or sing for a living. I was always too nervous doing public performances, so writing won. My teenage self was a little convinced she could be an actress too. She did auditions for a place on a performing arts course at Manchester University. The only problem was, she couldn’t act! Needless to say, she didn’t get the place. So I’d tell my teenage self to stick to the writing and not give up, because one day it will all work out.

Can you rate self-publishing and trad-publishing out of 10 as you’ve done both please?

Out of 10 is tough. I love self-publishing because you get to set your own deadlines and decide what you write and how you write it. If I wanted to write a time-travelling romance about howler monkeys on a boat in the Atlantic, I could, and nobody could stop me (it’s likely that nobody would buy it, but I could). I love the creative process, and the control you have over each project from start to end. The power to make it as perfect as I can lies with me and I get out what I put in, which makes me work that much harder. At the same time, traditional publishing is nice for that very reason – I don’t have to worry about formatting my book or designing a cover or laying it out for publication or even editing and proofing it (although I do). I can hand it over to the publisher and let them get on with it while I get on with writing another book. There’s a validation that comes with being published by someone else too, and that’s very good for the ego! If someone out there is prepared to risk money on putting my book out, I must be doing something right. So there are pros and cons for both.

What is the hardest part of {a book} to write?
The first draft takes the most concentration. They always get off to a flying start but if I don’t keep up the momentum they get abandoned. Making the plot fit together can be hard. For example, in the book I’m writing now, I know that the protagonist has to get down a certain dark alley to be attacked. You might think that’s a simple thing, but there has to be a convincing reason why she’d be in that dark alley, knowing what she knows about the man who may be lurking down there. So I need to come up with that reason and get her there. I still haven’t found it!

Do you have a fictional crush and if so, who?**
Seriously, how can you even ask me that? I have hundreds! In fact, my crush list is legendary amongst my friends. It does include The Doctor, obviously, but only the last 4 regenerations. At a push, I might do the fifth Doctor too.

Which character (if any) is most like you?
It has to be Luca. He’s always joking, but he hides his insecurities behind his humour. He’s pretty easy going, though, and will help anyone if he can. He loves his family and he loves food. He’s a total flirt, but not in a sleazy way, he just can’t help
it. That’s all me!

If you don’t already know, what star sign do you think your main character is?**
This is quite hard. I have a vague idea that Jacob is one of the youngest of his year, so I’m thinking a July birthday. He’s not a Gemini; I know that for certain from the way he acts, so I’m going for Cancer. He has a strong love and loyalty for his family and friends and has a kind heart, and they are all traits of that star sign.

Thanks Sharon... I know my questions were weird & there were points I was really excited (marked as **) so I'm really glad I got a chance to throw my questions at you- even if the last one might've been nicked of you... And you called it hard ;) Who doesn't believe in Karma?

I just realized, talking about boyfriends of the fictional (I should've said bookish for a shorter list that wouldn't include Colin/Merlin, eh?) variety that I may end up having two called Luca... Yes, that's right folks! You can see my rather ancient list here. By ancient I don't mean that it includes a guy who is over a thousand years old... But I do love The Doctor! Who doesn't?

SKY SONG + YOUNG MOON
Series: ☑
BOOK 3 IS TO BE RELEASED SOON***
You can only not enter (or win) if:
- You're under 18 without parents permission (there is still only one entry per household).
- The email address we'll send these ebooks* supplied by Sharon doesn't belong to an individual over 13. Please use parent's with permission, again.
- If your entries are verified (not cheats). Winner will be checked.
- You contact us back with email address (we'll tweet you if necessary & get it DM'd) within 36 hours.

*Ebooks are provided in PDF. You are free to convert, but not redistribute, this PDF. If you have Sky Song already we may be able to reach an agreement of sorts! I say this because many will have it... It's touring in August & you get a free copy... if you get there NOW. Link on image.

What the man told him was too incredible to believe, yet Jacob did believe it. On some deep unconscious level he had always known it to be true. He was an invention, a fictional character. Jacob Lightfoot didn’t exist.
*** The giveaway will have ended by then so if you would like Book 3 early all you have to do is review these books before it comes out the next month. I promise, it's that easy! If you don't win you can always read the sample of Sky Song & see what you think (the whole novel is less than 200 pages so why just have a sample?)
I'd love to see some more reviews pop up & who knows what you'd get after just reviewing Sky Song?

If you have time after all that you can comment here too (if you don't have a Twitter you'll know it's helpful if you do!)  You don't have to, it's not like there's a choice between books or anything...
Think that's it! Be honest, support indie & good luck!

Trish @ Between My Lines said...

Thanks for sharing the tour badge Amy. Shaz x

That was an awesome interview, guys - well done! :) x

I'm not gonna enter the giveaway (I've read the books obviously!) but I have to say I do adore Sharon!! And those books Ah-May-Zingggg!!! Laaaav the interview Amy!! And how can you NOT love the Doctor. I mean David Tennant *swoons*

The interview made me laugh! I'm hoping that I'll enjoy Sky Song just as much!

Thanks so much for hosting the giveaway Miss Bookworm, you're doing an awesome job. And thanks to your visitors. :)

I love that second cover. LOVE IT. Also, I am intrigued by timetravelling and sailing howler monkeys. ;P

Just catching up so only just seen this! Fab interview and what a great giveaway! Well done, both!